LONDON (Reuters) – As his grip on the reins of power began to ebb away, Boris Johnson became an increasingly angry figure who felt that many in what he called the British establishment were seeking to force him out because they could never forgive him for Brexit.

According to two close aides and several others surrounding him, the soon to be ex-prime minister felt months of a drip-drip feed of reports of law breaking at Downing Street were unfair, choreographed by a media hostile to his role in securing Britain’s divorce with the European Union.

Under pressure, Johnson, known for his flamboyance in public but often shy in private, retreated into his Downing Street residence and office, either unable or unwilling to try to win back the support from his lawmakers that drained away.

Those lawmakers were tired and increasingly embarrassed by having to defend their leader in their constituencies, or electoral areas. What felt like a never-ending stream of scandals was becoming impossible to justify or explain amid widespread public anger, several lawmakers said.

That was especially true for those who had won seats in parts of England that did not traditionally back the Conservative Party.

Many had voted for Johnson to deliver Brexit, but were then faced with a prime minister they felt they could not trust.

Instead of trying to calm their nerves, Johnson became increasingly isolated, surrounded by a small number of advisers who did little to convince him that his view that he was being punished for Brexit might not be helping.

Despite rising pressure to quit, Johnson first wanted to tough it out, believing he was at his best when backed into a corner and convinced he could fight on and deliver what he felt was his hard-won mandate to govern the country.

Even after being publicly ridiculed in parliament where lawmakers in his Conservative Party told him to resign to his face, and others openly laughed at him, it was only when a group of ministers and his closest colleagues appealed to Johnson that he decided to go.

A letter from his finance minister, appointed to try to shore up the prime minister’s fading authority just two days before he resigned, summed up the feelings of many after Johnson initially signalled he would not willingly give up the fight.

“Yesterday, I made it clear to the Prime Minister alongside my colleagues in No10 that there was only one direction where this was going, and he should leave with dignity,” Nadhim Zahawi wrote in an open letter on Thursday.

“Prime Minister, you know in your heart what the right thing to do is, and go now.”

It was all so different when Johnson came to power in 2019.

An often comedic figure known for his ambition, untidy blond hair, flowery oratory and cursory command of policy detail, Johnson rode to power in 2019 by casting himself as the man of the people who could deliver Brexit.

He oversaw Britain’s departure from the European Union and promised a radical new agenda to cut red tape and bureaucracy, boost investment and “level up” or tackle the deep inequalities between the different regions of Britain.

It was an unashamedly populist agenda to reshape how Britain had been governed for decades – one which his team in the early days was willing to force through despite opposition in the civil service and in parts of the governing Conservative Party.

He made enemies early on, taking on the establishment and, according to some civil servants, bending, even breaking the rules.

But it was the outbreak of the novel coronavirus, identified in the central Chinese city of Wuhan in December 2019, that pushed Johnson’s Brexit agenda into near obscurity and dominated the early months of his premiership.

His initial response to the pandemic set the tone. Johnson first downplayed the virus and then was forced to change tack when scientific projections showed a quarter of a million people could die in the United Kingdom. He then shuttered Britain, advising people to stay home.

When he himself came down with the virus and almost died, he won huge popular sympathy. Some of that was eroded by questionable procurement contracts and his defence of his former adviser Dominic Cummings, who broke lockdown rules. But the government was able to boast of a fast vaccine roll-out and a popular programme to pay most of the salaries of furloughed workers.

Only later did it emerge that, while most of the country was stuck at home under strict lockdowns, workers at Downing Street were drinking and sometimes partying into the early hours of the morning.

The public was furious to learn that – while thousands had missed funerals, family gatherings and stuck to the rules for the good of the country – those who made the rules were breaking them. Johnson himself was fined by police over a gathering to mark his 56th birthday in June 2020.

“I’ve had enough,” said one Conservative lawmaker on condition of anonymity at the time, who said he had stopped holding Saturday meetings with constituents “because it’s too painful”.

Other scandals eroded support. In 2021, Johnson initially defended a Conservative lawmaker who had been found guilty of breaching lobbying rules, then reversed course.

An election body fined the Conservatives for failing to accurately report a donation to fund the luxury refurbishment of Johnson’s flat, which included gold wallpaper.

The resignations that finished Johnson off this week followed the case of Christopher Pincher, a Conservative lawmaker who admitted making people uncomfortable during a drunken night out. Just four months ago, Johnson had promoted Pincher to a post looking after the well-being of colleagues in parliament, despite previous allegations of sexual harassment.

Johnson’s office said there had been no specific accusations against Pincher in the past. A senior civil servant said publicly that this was false. Johnson blamed a lapse in memory.

Even towards the end, Johnson tried to keep going on.

After Russia invaded Ukraine this year, he painted himself as a war-time leader, dismissing scandals as distractions blown out of proportion by his foes. He was one of the first Western leaders to visit President Volodymyr Zelenskiy in Kyiv.

“He will fight on,” one former Johnson adviser said on July 5 when his finance and health ministers resigned.

Just last month in Rwanda, a defiant Johnson envisioned remaining in power until the middle of the next decade, which would have made him the country’s longest continuously serving leader in 200 years.

Sitting cross-legged on a blue sofa under a chandelier at the British High Commissioner’s residence on a hillside above Kigali, Johnson said he wanted to serve a third term in office to focus on his priorities of levelling up and making changes to Britain’s legal and immigration systems.

For a man who according to one biographer as a child said he wanted to be “world king”, becoming prime minister was the end result of a life-time ambition.

But opponents had long said his personal unfitness for the job and his inattention to detail would shine through once his showmanship mask slipped and the jokes wore thin.

“A House of Cards built on lies and deceit comes crashing down,” said Ed Davey, leader of the centrist Liberal Democrats. “Go and go now. You have discredited our great country long enough.” 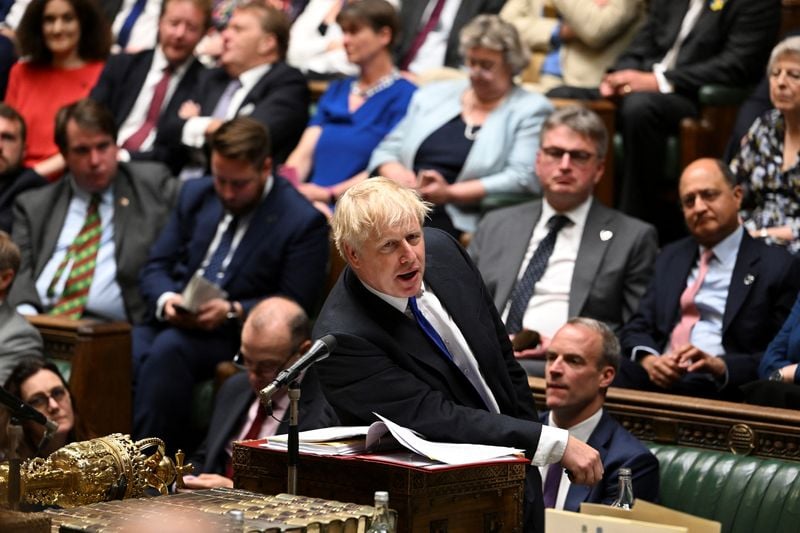