(Reuters) -A jury in Austin, Texas, decided on Friday that U.S. conspiracy theorist Alex Jones must pay the parents of a child killed in the 2012 Sandy Hook massacre $45.2 million in punitive damages for falsely claiming the shooting was a hoax, on top of $4.1 million in compensatory damages.

Here are some of the other legal challenges Jones and his company now face.

Jones faces a separate trial over damages in the same Austin court for defaming the family of another victim of the Sandy Hook Elementary School mass shooting. His lawyer said Friday that the case is on pause due to his company’s bankruptcy.

Jones is due to stand trial to decide damages in a different case in Waterbury, Connecticut, after he was found liable by default judgment for defaming families of several Sandy Hook victims with falsehoods about the shooting that killed 20 children and six staff in Newtown, Connecticut.

Jones had called the shooting a hoax by the U.S. government, staged using crisis actors to serve as a pretext for taking away Americans’ guns. He has since acknowledged that the massacre was real.

The Connecticut trial, which had been set to begin in September, was put on hold after Jones’ company, Free Speech Systems LLC, declared bankruptcy last week. Jones said during a Monday broadcast of his Infowars program that the filing will help the company stay on the air while it appeals.

In the bankruptcy case, Sandy Hook parents told a Houston judge this week that Jones might continue to draw money from Free Speech Systems, the parent company of his far-right Infowars website, while using its bankruptcy case to avoid paying court judgments in the defamation cases.

The families have said Jones took $62 million from Free Speech Systems while burdening it with $65 million in “fabricated” debt owed to PQPR Holdings, a company owned by Jones and his parents. They asked the bankruptcy court not to allow Free Speech Systems to send money to Jones or his companies until they have an opportunity to get to the bottom of Infowars’ finances.

A lawyer for the plaintiffs in the Texas trial on Wednesday disclosed that Federico Andino Reynal, a lawyer for Jones, had inadvertently sent him a file containing two years of Jones’ text messages, along with trial strategy notes and medical records.

Jones has maintained that he searched his phone for texts about Sandy Hook and never found any. He denied on the witness stand that he had lied, but the disclosure raised the possibility that Jones could be charged with perjury, a crime.

Judge Maya Guerra Gamble on Tuesday admonished Jones for not being truthful during his testimony when he said he was bankrupt and had complied with plaintiffs’ requests for information before the trial.

Defense lawyers in Texas said perjury prosecutions are rare, particularly for conduct in a civil case.

The judge in the Connecticut case on Thursday ordered Reynal and another lawyer for Jones to appear for hearings this month on whether they should face sanctions for the unauthorized release of the plaintiffs’ medical information, apparently in reference to the disclosure of Jones’ records in Texas. Reynal did not immediately respond to a request for comment on the matter.

The disclosure could also have implications for the inquiry by a U.S. House of Representatives committee into the Jan. 6, 2021, attack on the U.S. Capitol by supporters of former President Donald Trump. Mark Bankston, a lawyer for the parents in the Texas defamation case, said in court on Thursday that the committee asked him to hand over the text records he received.

Jones marched with supporters to the Capitol on the day of the riot, but has not been charged with any criminal wrongdoing in connection with it.

(Reporting by Jack Queen and Dietrich Knauth in New York; Editing by Will Dunham, David Bario and Leslie Adler) 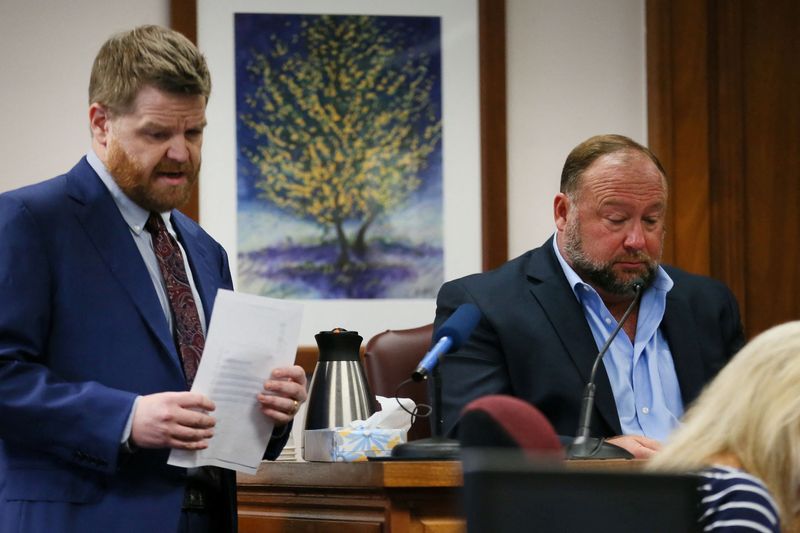