KYIV (Reuters) – Ukraine’s rapid territorial gains have caught Russia off guard at a vulnerable section of their front line in an attack that threatens an important supply hub used by Moscow in the east, military analysts said.

The surprise advance was Ukraine’s most dramatic of the war so far and came in northeastern Kharkiv region hundreds of kilometres from the southern Black Sea region of Kherson where the brunt of a Ukrainian counteroffensive was expected.

Moscow has long held around a fifth of Ukraine’s territory in the south and east. It heavily reinforced its troops in the south as Kyiv talked up plans to attack there in recent months, but that left Russian forces exposed elsewhere, said Konrad Muzyka, director of the Rochan military consultancy in Poland.

After days of withholding battlefield developments, Ukraine said on Thursday that its forces had burst through Russian lines in the Kharkiv region that borders Russia, advancing up to 50 km (30 miles) and capturing dozens of settlements.

“It’s an opportunistic attack that’s really caught the Russian forces by surprise. It could actually become something quite significant if the Ukrainians are able to push on and take the (city) of Kupiansk,” said Neil Melvin of the RUSI think tank.

Kupiansk is a rail hub on the way to the key Russian-held outpost of Izium from where Moscow has anchored some of its main operations in the partially-occupied eastern region of Donetsk whose full capture the Kremlin has prioritised.

Civilians were being evacuated from Kupiansk and Izium, a Russian-appointed local official, Vitaly Ganchev, said after Russia’s defence ministry posted footage of trucks and armoured vehicles it said were heading to the Kharkiv region.

The U.S.-based Institute for the Study of War predicted Kyiv’s forces would likely recapture Kupiansk within 72 hours.

“That (gain) would then threaten an encirclement of Russian forces in Izium, so it could become quite a blow for the Russians in Donetsk (region). There is a chance to have a strategic breakthrough on the Donetsk front,” Melvin said.

Ganchev said earlier that the breach was a “substantial victory” for Kyiv in a surprising acknowledgment broadcast on state television in Russia after months in which Moscow has said its “special military operation” is going to plan.

But many in the West still predict a long war of attrition.

“This is likely to go on for some significant period of time,” U.S. Secretary of State Antony Blinken said on Friday. “President Putin has demonstrated that he will throw a lot of people into this.”

Ukrainian President Volodymyr Zelenskiy said in his nightly address that Ukraine had retaken more than 1,000 square km (385 sq miles) of territory in the south and east since Sept. 1.

Previously the battlefield’s frontlines had not changed significantly since Russia claimed to have captured the eastern Luhansk region in early July.

“The general frontline situation resembles a stalemate, but perhaps we are seeing the first signs that the balance of power is shifting towards Ukraine,” Muzyka said.

He said that neither Ukraine nor Russia had the manpower and equipment to conduct a large-scale, combined arms counteroffensive.

“We are going to see probing attacks, limited incursions into certain areas. Depending on how they play out, we will see more movement or more advances, or counterattacks,” he said.

Dale Buckner, CEO of security firm Global Guardian, said “we do not believe the Ukrainians will be able to take entire sections of the Russian-occupied territory by spring of 2023, but will have limited success with smaller tactical objectives.”

Buckner said that Russian supply lines were now being stretched from Luhansk to Kherson, providing the opportunity for a surprise attack on the poorly defended front line in and around the Kharkiv region.

“This is the first real validation of Ukraine’s ability to counterattack—but with limited success. It does change the path of the conflict moving forward. The Russians now have an expanding challenge of defending the terrain they have taken,” he said.

Mykhailo Podolyak, an adviser to Ukraine’s president, told Reuters that Ukraine had significantly stepped up attacks on Russian logistics infrastrucure and supply corridors.

“We are pushing on their army in all directions, there isn’t one particular one. We are using the tactic of a thousand cuts. Kharkiv, Kherson, Melitopol directions, as well as Donetsk and Luhansk – they are a priority,” he said.

He said Moscow’s offensive had stopped and that Russia was switching to defence.

“Russia is opening defence in all directions, lost at where to send their reserves. They are trying to guess where our main targets will be, and redirect their reserves, including artillery capabilities, to those directions,” he said. 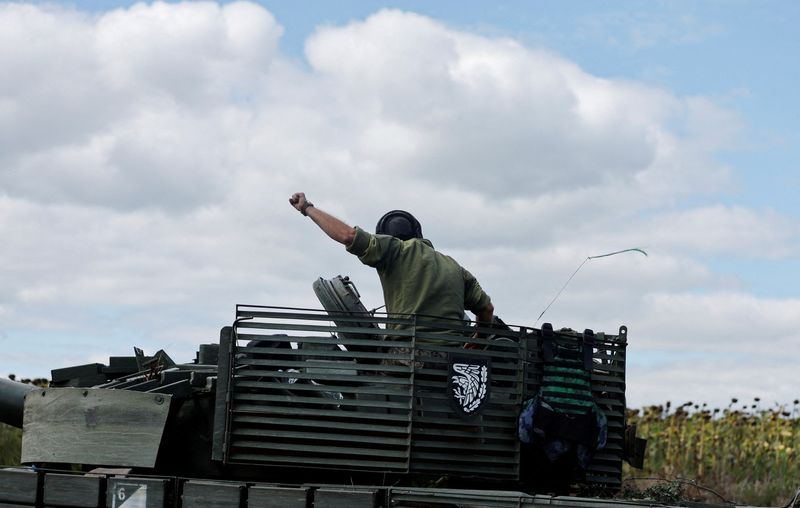