By John O’Donnell and Francesco Canepa

FRANKFURT (Reuters) -Turmoil in markets has triggered alarm over how banks will cope, with regulators warning they could repeat some of the mistakes that led to the financial crisis more than a decade ago.

Watchdogs are concerned that recent big swings in asset prices could compound the pressure on banks in the region resulting from Russia’s invasion of Ukraine, a deepening energy crisis, rising inflation and a worsening economic outlook.

That nervousness has been clear too across markets.

Some investors panicked last Friday, sending sterling and British government bonds into freefall after the government announced plans to slash taxes and pay with heavy borrowing.

And this week, Credit Suisse saw its stock tumble and the cost of insuring against default jump amid concerns over the turnaround of Switzerland’s second-largest bank as it prepares a restructuring plan after a series of setbacks and losses.

Credit Suisse said this week it remains close to its clients as it conducts its strategic review.

He even rebuked some for misplaced optimism, saying that the “Russian invasion of Ukraine is developing into a persistent and fully fledged macroeconomic shock”.

Enria singled out the risk that loans could go unpaid and that a repeat of the government support that prevented this happening in the pandemic was now less likely, urging banks to take him seriously.

Enria’s remarks follow a rare official warning by the European Systemic Risk Board, a risk-monitoring body, of threats to financial stability, or the functioning of the money system that ran aground in the crash more than a decade ago.

It highlighted risks including higher energy prices hurting borrowers’ ability to repay, volatile energy markets putting “strain” on traders and a fall in property prices – mortgage lending is central to many banks’ business.

Many regulators are worried, however, that their warnings are going unheeded.

Earlier, he cautioned that investors were being overly optimistic, pointing to some who believed that companies would still be able to repay even risky loans despite the downturn.

These threats have also been underscored in talks between European regulators and banks under their watch.

Earlier this year, the ECB wrote to banks, telling them to cut lending to the most indebted borrowers.

Leveraged transactions have grown to roughly 500 billion euros on the books of the euro zone’s 28 largest lenders from 300 billion euros in 2018 as banks sought riskier returns.

Banks have now responded, outlining how they were keeping risk from that business in check.

But Enria’s comments suggest that not all banks have learnt from past mistakes.

He pointed to “an increasingly optimistic attitude … which generates a certain reluctance on the part of banks to seriously engage in supervisory discussions on … risks”.

U.S. stock market volatility as measured by the VIX (.VIX) “fear index”, is well above a 30-year average, although far below the pandemic and financial crisis highs.

The cost of insuring against a Credit Suisse debt default rose as high as 355 bps on Monday and was at 308 bps on Wednesday, up from 57 bps at the start of the year, according to S&P Global data.

Santander’s Chief Executive Jose Antonio Alvarez said on Tuesday that liquidity in the banking sector was “extraordinarily high” and he did not see contagion risks when asked about Credit Suisse.

As concerns grow, investors have voted with their feet.

An index of European banks shares has fallen by 22% since the start of the year, leaving it trading at a 40% discount to the value of the banks’ assets.

But Karel Lannoo of Brussels-based think tank the Centre for European Policy Studies said banks are far safer now than they were in the past.

“With the banks’ share valuation where it is, the bad news is already priced in,” Lannoo said. 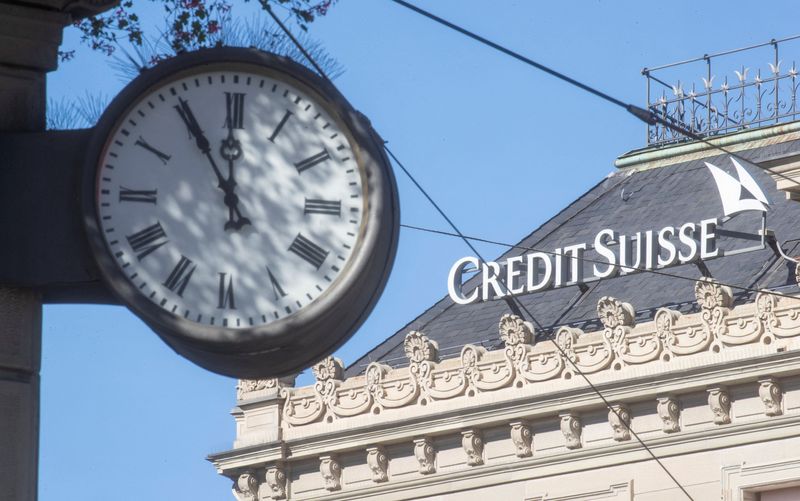