NEW YORK (Reuters) -A federal judge in New York on Thursday temporarily blocked parts of the state’s new gun law to allow the Gun Owners of America, an advocacy group, to pursue a lawsuit challenging the legislation.

The order marks one of the most prominent victories by gun-owners’ rights groups in challenging gun restrictions around the United States since June’s landmark decision by the U.S. Supreme Court that said for the first time that Americans have a constitutional right to carry weapons in public.

New York’s law came into effect on Sept. 1 and is being closely watched by other states around the country where gun violence has become recurrent. It establishes new requirements for obtaining a license, including submitting social media accounts for review, and creates a long list of public and private places where having a gun became a felony crime, even for license holders.

Lawmakers in the state’s Democratic-controlled legislature had passed the law during an emergency session in July after the U.S. Supreme Court’s decision also found the state’s licensing regime for firearms to be unconstitutional following a challenge by the New York affiliate of the National Rifle Association, a powerful gun-owners’ rights group.

Chief Judge Glenn Suddaby of the U.S. District Court in Syracuse agreed to issue the order at the request of six New York residents who are members of Gun Owners of America, which competes with the National Rifle Association in political influence.

He said his order would not take effect for three days to allow the New York government to appeal his ruling in a higher court.

New York Attorney General Letitia James said in a statement that her office planned to appeal. “Today’s decision comes in the wake of mass shootings and rampant gun violence hurting communities here in New York and across the country,” she said. “While the decision preserves portions of the law, we believe the entire law must be preserved as enacted.”

Related News:   'Life goes on' after Brazil riots but problems must be tackled: Supreme Court Justice

New York’s legislative leaders and Governor Kathy Hochul, a Democrat, had said they were appalled by June decision by the U.S. Supreme Court’s conservative majority. They warned that more people carrying guns in public would lead to more gun violence.

Still, they agreed to strip out a provision in the state’s law that the Supreme Court said wrongly gave subjective discretion to government officials to deny gun permits to New Yorkers.

At the same time, the state’s new Concealed Carry Improvement Act added new restrictions and requirements. It says applicants must submit their social media accounts for review by a government official and provide at least four character references.

The new list of ‘sensitive locations’ where carrying a gun is a felony is extensive. It includes schools and colleges, government buildings, medical facilities, public transit, bars or restaurants serving alcohol, “the area commonly known as Times Square” and parks.

Suddaby’s order sharply reduced the list of sensitive places: He said schools, colleges and government buildings may remain sensitive places, but many other categories could not.

The law also made it a felony to have a gun on someone’s private property unless the owner or lessee has posted a sign saying guns are welcome. Suddaby threw out this provision making an exception only for private fenced-in farmland. 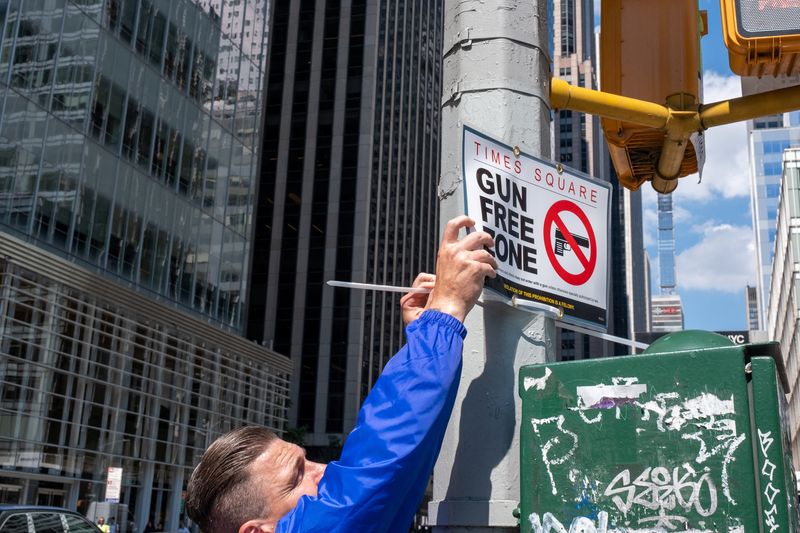