NEW YORK (Reuters) -A towering rally in the U.S. dollar is expected to hit third-quarter corporate earnings, potentially presenting another obstacle to stocks in a year that has experienced an already-painful market decline. The dollar index, which measures the greenback’s performance against a basket of peers, traded an average of 16.7% higher in the quarter that ended Sept. 30 than in the same period a year ago, helped by a hawkish Federal Reserve and turmoil in global financial markets that boosted the dollar’s safe-haven appeal. That means a wide range of companies will likely cite the dollar’s rise as a headwind to their bottom lines as corporate earnings season kicks into gear this month. A stronger buck makes U.S. exporters’ products less competitive abroad while hurting U.S. multinationals that need to exchange their earnings into dollars. The stronger dollar is “one of the contributors to the notion that earnings expectations for the S&P 500 need to come down more,” said Erik Knutzen, chief investment officer of Neuberger Berman’s multi-asset class portfolios. “It is one of the factors that leads us to be more cautious on equities.” Ohsung Kwon, U.S. equity strategist at Bank of America Securities, expects the dollar’s strength to cut between 5% and 6% of earnings for S&P 500 companies, compared to a 2% hit last quarter. The S&P 500’s foreign exposure stands at about 30%, with the technology and materials sectors most vulnerable, BofA estimates.

Earnings estimates have already fallen this year, as analysts account for a darkening U.S. economic outlook amid rising inflation and tightening financial conditions. Analysts expect third quarter S&P 500 earnings – which will start rolling in as the season kicks off next week – to have increased by 4.5% from a year ago. That is down from the 11.1% rise they were expecting at the start of July, according to IBES data from Refinitiv as of Sept. 30. A bigger than expected earnings decline could further complicate the picture for U.S. stocks. The S&P 500 is down about 21% this year, with few investors expecting the volatility to end until there are clear signs the Fed is getting the upper hand in its battle against inflation. “Dollar strength continues to serve as a headwind for equities … and our FX strategists do not see the strong dollar going away any time soon,” analysts at Morgan Stanley wrote.

The stronger dollar has already claimed its share of victims this year. Nike, which receives more than half its revenue from outside North America, last month doubled its estimates for the currency’s headwind on earnings to $4 billion, sending its shares down 13% on Sept. 30. Other companies that have recently warned of the dollar’s impact include IBM Corp, DuPont de Nemours and Procter & Gamble Co. While companies take steps to guard their profits from big exchange rate moves by using various hedging strategies, including those that employ forwards and options, they typically hedge only about 50% to 75% of their foreign exchange exposure, said John Doyle, vice president of dealing and trading at Monex USA. To be sure, there is an upside to the greenback’s strength for U.S. stocks, as companies that rely on importing goods will find their buying power increased. At the same time, expectations of a rising buck make dollar-denominated assets more attractive to foreign investors by assuaging fears of a possible foreign exchange hit when they convert assets back into their home currency. “It allows (foreign) investors to invest in what they think is a high growth area without worrying too much about the currency,” said Colin Graham, head of multi-asset strategies at Robeco Institutional Asset Management. Signs of a dollar peak, however, could push investors into currencies they expect to rebound as the dollar falls, analysts said. That peak is unlikely to come in the near future, according to analysts polled Reuters. Though the dollar index is down about 2% from its recent high, 85% of analysts polled by Reuters said the dollar’s broad strength against a basket of currencies has not yet reached an inflection point. Similarly, analysts at UBS Global Wealth Management believe a hawkish Fed, a comparatively strong U.S. economy and weak growth in Europe will keep the dollar elevated for the time being. “We think it’s too early to call a peak in Fed hawkishness or a top in the greenback,” they wrote in a recent report. 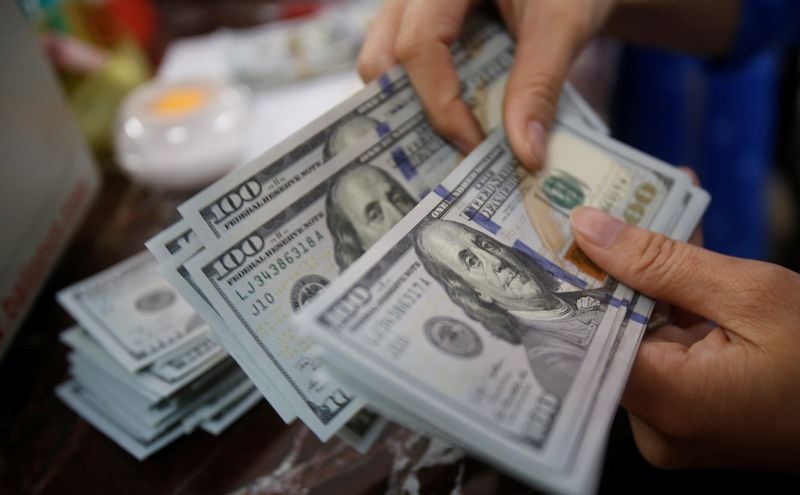