By Julia Harte and Daniel Trotta

NEW YORK (Reuters) -Crime dominated the debate between New York Governor Kathy Hochul and Republican challenger Lee Zeldin on Tuesday, as polls indicate Zeldin has leveraged the issue to narrow the gap against the Democratic incumbent ahead of the Nov. 8 election.

The state’s majority Democratic electorate has not chosen a Republican governor since 2002. But recent public opinion polls show Zeldin is gaining on Hochul, prompting the governor to put new focus on public safety in the final weeks of her campaign. Early voting starts in four days.

Zeldin declared the state was “in crisis,” citing crime, the economy and other issues, while ramping up criticism of policies Hochul has supported, such as eliminating cash bail for non-violent felonies and most misdemeanors.

“There are criminals out there who need to pay the consequences for their action, instead of the catch and release policies that Kathy Hochul champions,” said Zeldin, a U.S. representative from Long Island.

“It is a joke to talk about a crime policy that doesn’t include doing something about illegal guns,” Hochul said.

Hochul is still projected to win, and some polls showed her ahead by more than 20 percentage points as recently as this summer. But as Zeldin called attention to some sensational crimes on the New York City subway system, her lead dwindled to single digits in some mid-October polls. Quinnipiac University and SurveyUSA showed her leading by just four and six points, respectively.

While the economy remains the top priority for the biggest share of voters, 5% have continuously ranked crime or corruption as the most important problem facing the United States today, according to Reuters/Ipsos polling from late September to late October.

She has emphasized public safety more in recent days, releasing an ad on Friday that pledged “a safer New York for every child” and appearing with New York City Mayor Eric Adams on Saturday to announce a surge in the police presence in the city’s subway system.

(Reporting by Julia Harte in New York and Daniel Trotta in Carlsbad, Calif.; Editing by Colleen Jenkins and Josie Kao) 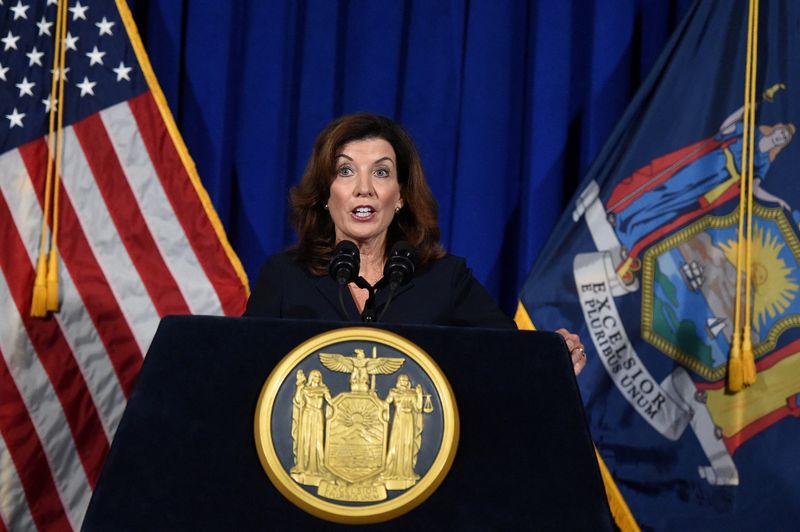