TOKYO (Reuters) -A Tokyo court upheld a ban on same-sex marriage on Wednesday but said a lack of legal protection for same-sex families violated their human rights, a comment welcomed by plaintiffs as a step towards aligning Japan with other G7 nations.

Japan is the only G7 nation that does not allow same-sex marriage, and its constitution defines marriage as based on the mutual consent of both sexes.

In Wednesday’s ruling, the Tokyo district court said the ban was constitutional, but added that the absence of a legal system to protect same-sex families infringed their human rights.

“This is actually a fairly positive ruling,” said Nobuhito Sawasaki, one of the lawyers involved in the case.

“While marriage remains between a man and a woman, and the ruling supported that, it also said that the current situation with no legal protections for same-sex families is not good, and suggested something must be done about it,” he told Reuters.

Japan does not permit same-sex couples to marry or inherit each other’s assets, such as a shared home, and denies them parental rights to each other’s children, while even hospital visits can be difficult.

Though partnership certificates from municipalities cover about 60% of Japan’s population, they do not give same-sex couples the same rights enjoyed by heterosexual couples.

The Tokyo ruling promises to be influential as the capital has an outsized influence on the rest of Japan.

It had been keenly awaited after hopes were raised by a 2021 ruling in the city of Sapporo that the ban was unconstitutional, although another decision in Osaka in June upheld the ban.

The eight plaintiffs in the case said the ban contravened their human rights and demanded damages of 1 million yen, although the court rejected that.

“This is hard to accept,” said Gon Matsunaka, head of the activist group Marriage for All Japan.

Both heterosexual and same-sex couples should be able to benefit equally from the system of marriage, as everyone is equal under the law, he added.

“It (the ruling) clearly said that is not possible.”

Yet the recognition that same-sex families lacked legal protections was “a big step”, he said.

The plaintiffs, who unfurled a banner outside the courthouse reading, “A step forward for Marriage Equality” after the ruling, said they were encouraged.

“There were parts of this that were disappointing, but parts of it gave me hope,” said one of them, Katsu, who gave only his first name.

Two more cases are pending in Japan, and activists and lawyers hope an accumulation of judicial decisions supporting same-sex marriage will eventually push lawmakers to change the system, even if this is unlikely soon.

“I hope there will be legislative debate about this,” said plaintiff Shizuka Oe. “We will keep making efforts.”

The situation has limited the talent pool for global firms, as groups such as the American Chamber of Commerce in Japan have pointed out, calling for change.

“Thinking about the future of their lives, they don’t see anything in Japan,” said Masa Yanagisawa, head of prime services at bank Goldman Sachs and a member of the group Marriage for All Japan.

“So they move to more friendly jurisdictions, like the United States.” 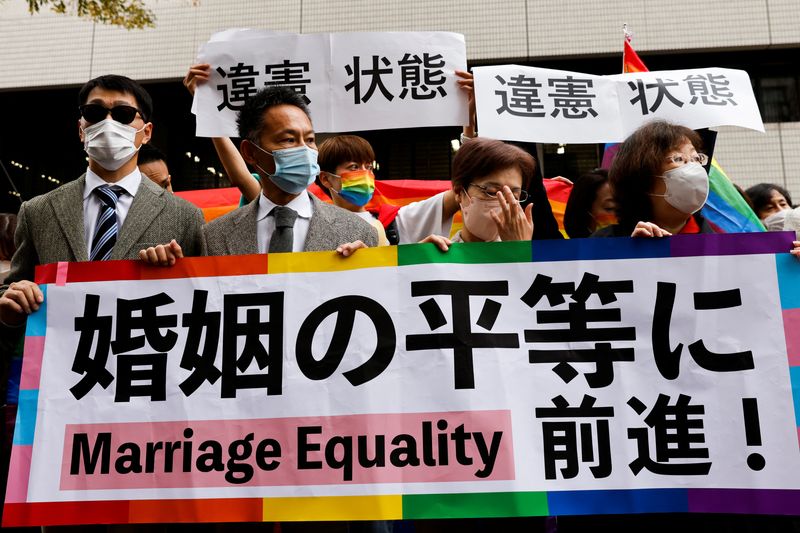 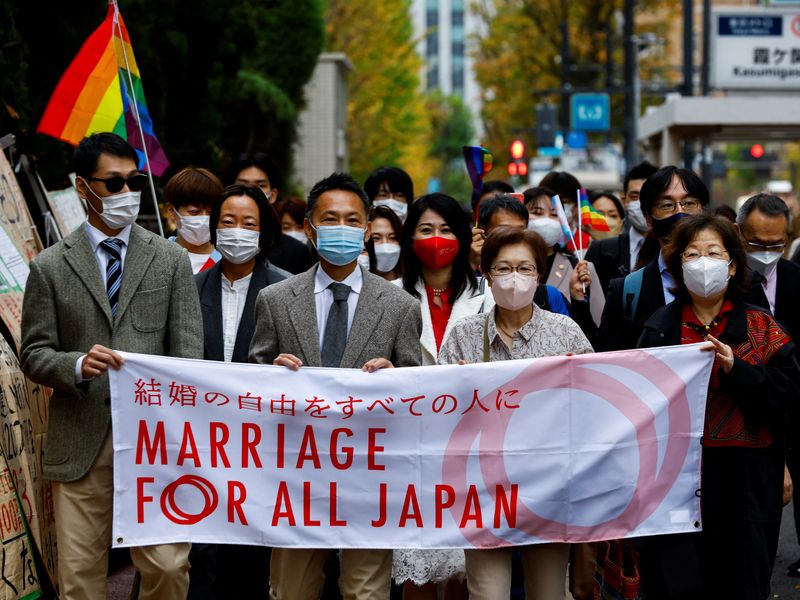 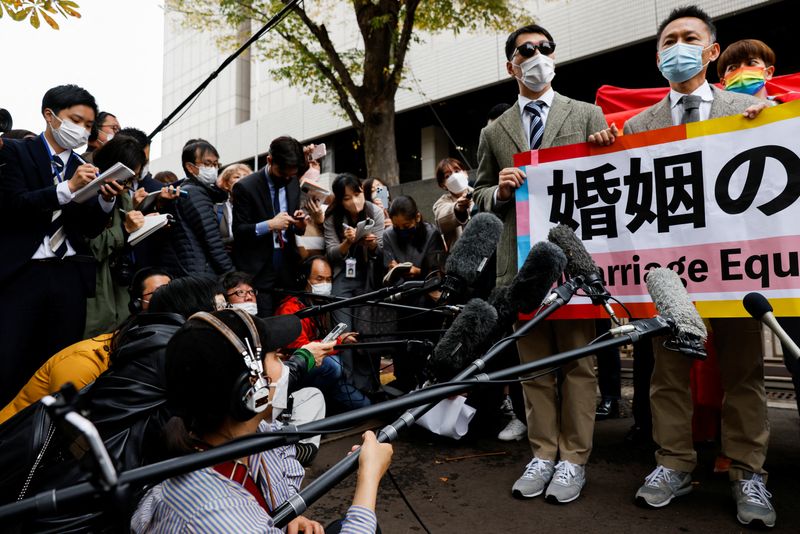 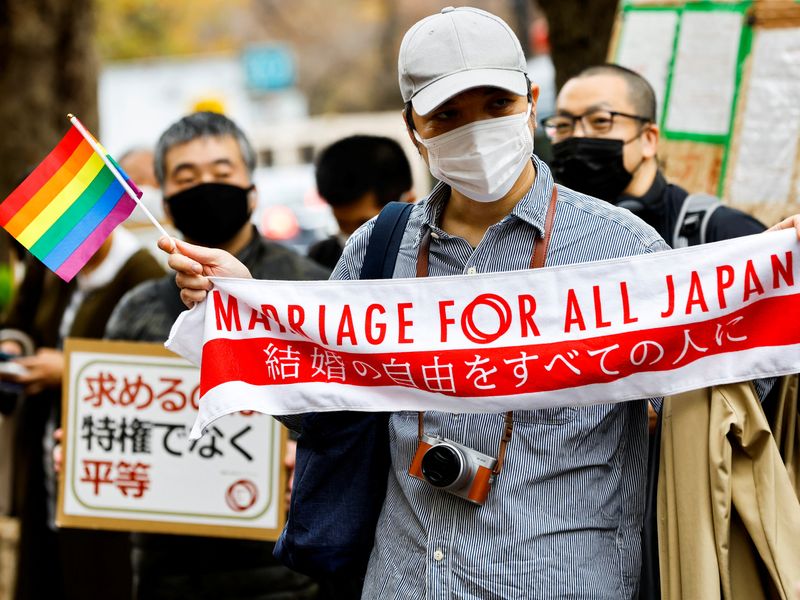 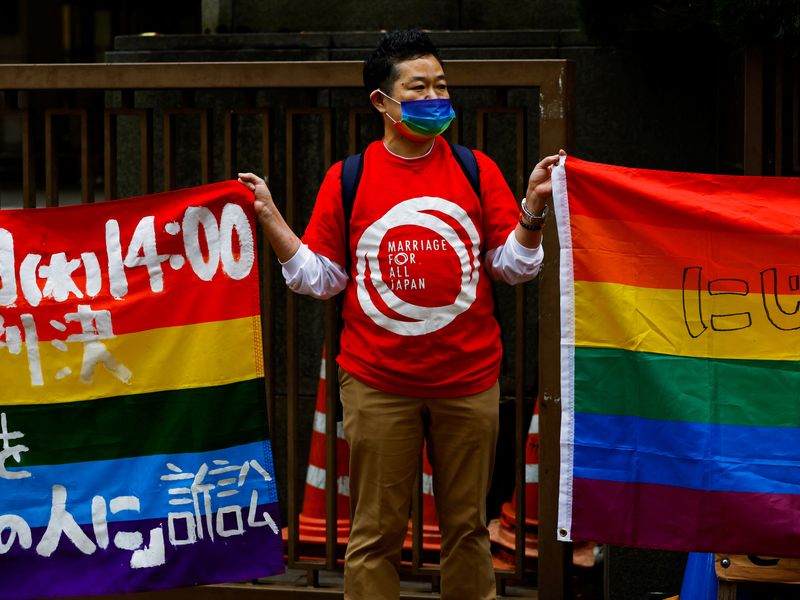