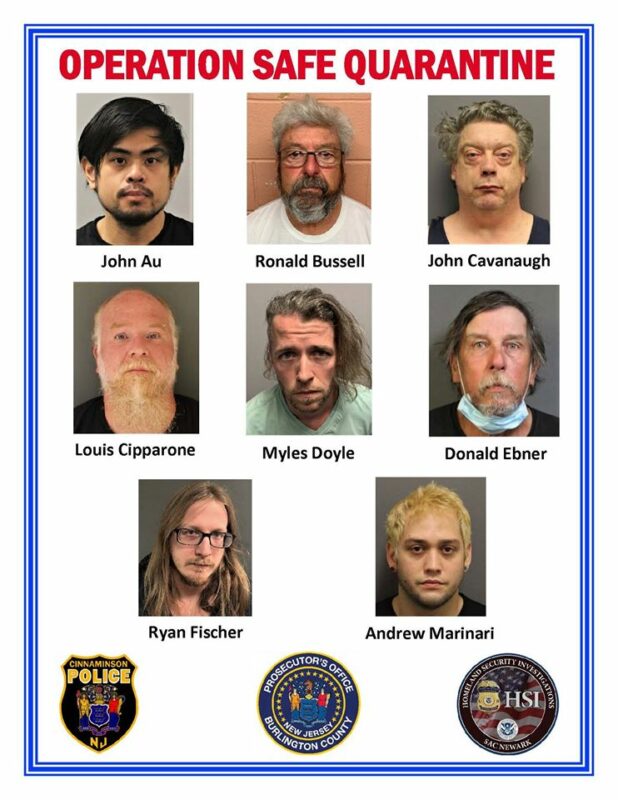 “Those who believe the anonymity of cyberspace will mask their illegal activity could not be more mistaken,” Prosecutor Coffina said. “As illustrated by these arrests, we know how to find you, apprehend you, and hold you accountable for endangering innocent children as a means of seeking your depraved gratification.”

Always a priority of the BCPO, and our partners in this endeavor, the investigation of these cases took on added urgency during the mass quarantine associated with the COVID public health crisis. The resulting dramatic increase in Internet activity throughout the state increased opportunities for sexual exploitation of children online.

The BCPO received 52 cybertips from March 17 through July 16, 2020, compared with 29 cybertips during roughly the same time last year. Statewide, from March 1 through May 23, 2019, the New Jersey Internet Crimes Against Children Task Force received 760 cybertips. During the period following the onset of the COVID crisis, there were 2,240, almost three times as many.

Beginning in mid-May, this cooperative operation has resulted in the following arrests:

• John Au, 30, of Hackemore Street in Burlington Township, was charged July 16 with three counts of Endangering the Welfare of a Child (two are Second Degree, one is Third Degree). Au is charged with possessing and distributing child pornography.

• Ronald Bussell, 71, of Shamrock Lane in Marlton, was charged June 25 with three counts of Endangering the Welfare of a Child (two are Second Degree, one is Third Degree). Bussell is charged with possessing and distributing child pornography.

• John J. Cavanaugh, 51, of Kings Highway in Maple Shade, was charged June 10 with four counts of Endangering the Welfare of a Child (three are Second Degree, one Third Degree). Cavanaugh is charged with possessing and distributing child pornography.

• Louis Cipparone, 47, of Stacy Court in Burlington City, was charged June 2 with three counts of Endangering the Welfare of a Child (two are Second Degree and one is Third Degree). He is charged with sending and receiving child pornography on multiple social media accounts.

• Donald Ebner, 63, of Dove Court in Lumberton, was charged June 16 with Endangering the Welfare of a Child (Second Degree). Ebner, a janitor at Delran Intermediate School, possessed more than 1,000 child pornography images.

• Myles Doyle, 33, of Fieldcrest Drive in Westampton, was charged July 1 with three counts of Endangering the Welfare of a Child (two are Second Degree, one is Third Degree). Doyle is charged with possessing and distributing child pornography, including images of infants and toddlers.

• Andrew Marinari, 27, of Lenape Trail in Medford Lakes, was charged May 29 with two counts of Endangering the Welfare of a Child (Third Degree) and Providing Obscene Material to Persons Under 18 (Third Degree). Mariani is accused of possessing child pornography, showing it to people under 18 years of age, and engaging in sexually explicit conversations with numerous juveniles on social media platforms. The investigation revealed that he was communicating with numerous underage juvenile males, sending photos of his genitals and receiving the same from them. “The worldwide tragedy of COVID has impacted our lives in countless ways, upending our daily routines, including our children’s ability to attend school in person,” said HSI Newark ASAC Reinhold. “With children spending more time online for school and entertainment, it is unthinkable that perpetrators would try to take advantage of this difficult time to exploit our most vulnerable citizens. However, this is the reality we confront across our state, and why Operation Safe Quarantine is so important, resulting in the continued need to combine the resources of Burlington County law enforcement and Homeland Security Investigations – Cherry Hill, to pursue such criminals. This important effort also goes right in line with HSI’s national initiatives for child internet safety during COVID, including iGuardian and Operation Stolen Promise.”

HSI has assigned a special agent to the BCPO, who is serving as an acting county detective in the High-Tech Crimes Unit. HSI also develops intelligence on possible online offenders and refers cases to the BCPO, as does the FBI – Federal Bureau of Investigation and the National Center for Missing & Exploited Children.

Cinnaminson Township has also committed an officer to a long-term assignment with the BCPO HTCU, which conducts investigations into crimes that involve the use of high-end technology such as computers, cellular telephones, telecommunications equipment and other advanced methods.

“The importance of these types of cybercrime investigations goes beyond just obtaining and presenting evidence in Superior Court; they stop our children from being further exploited, and prevent re-victimization by disrupting the continued dissemination of these sickening materials,” said Cinnaminson Chief Calabrese. “It is imperative that all law enforcement agencies take an active role in helping to combat these types of crimes. That cannot be emphasized enough.”

Prosecutor Coffina expressed his appreciation for the effective work of the investigators from all of the agencies involved in Operation Safe Quarantine.

“I am extremely grateful to our detectives, command staff and assistant prosecutors, as well as our superb law enforcement partners, for advancing these investigations despite all of the challenges and disruption to operations that the pandemic has presented,” Prosecutor Coffina said. “I am also very appreciative of our long-term partnerships with HSI, the Cinnaminson Township Police Department, and other law enforcement agencies whose commitment of personnel to our High-Tech Crimes Unit enables us to dedicate the resources necessary to bring these offenders to justice.”

BCPO Detective Kevin Sobotka was the lead investigator on the cases involving Au, Doyle and Marinari, while Detective Sgt. Dave Kohler led the investigations of Cipparone and Ebner, and Detective Jennifer Appelmann was the lead investigator on the cases against Bussell and Cavanaugh. Detective Sgt. Kohler and Detective Appelmann conducted the investigation that led to the charges against Fischer. All of these cases are pending presentation to a grand jury for possible indictment. The defendants will be prosecuted by BCPO Assistant Prosecutor Joseph Remy.