TOMS RIVER, NJ – New Jersey Assemblyman Gregory P. McGuckin and his political ally, Toms River Mayor Maurice Hill tried three times unsuccessfully to take over the Toms River Regular Republican Club.  Now, McGuckin and Hill, who have both fallen out of favor with residents in their town over the past year have announced they are forming a new Republican Club and want to seize control, by force the coveted line in the 2021 Toms River municipal election cycle in which four out of seven members are up for re-election.

Hill and McGuckin want total control of everything in Toms River, its town council, its school board and all of the township’s public finances.  Controlling the Toms River Republican Club will allow McGuckin and Hill to control nearly every taxpayer dollar spent in Toms River for the next four years. 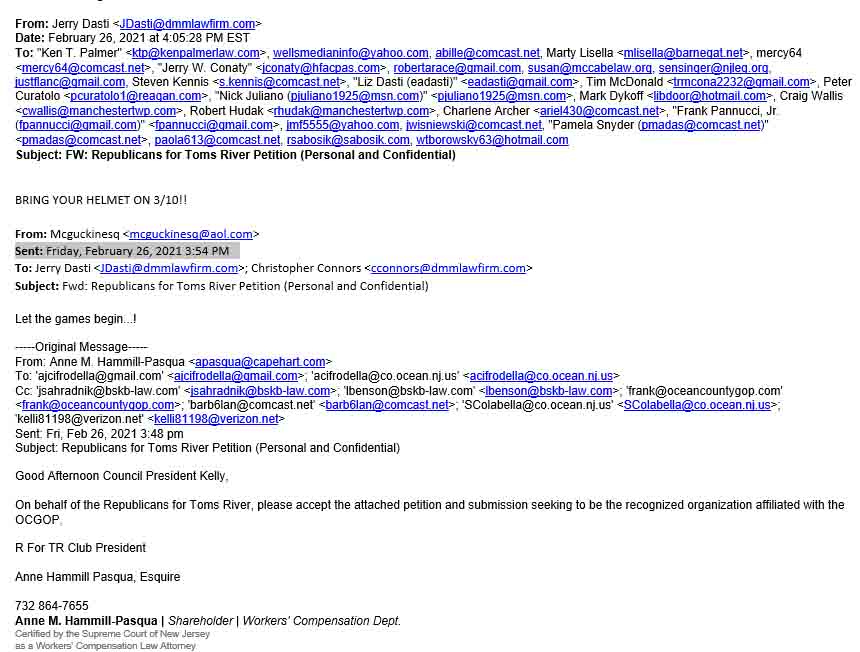 It’s why longtime residents and party officials have kept Hill, McGuckin and Ocean County Commissioner Virginia Haines at bay for the past year.  Last week, Haines, who was previously running for President of the Toms River Republican Club officially withdrew her candidacy after finding out she was in clear violation of NJ election law.

Now, Haines has jumped on board with Hill and McGuckin. McGuckin, in 2020 in Trenton, introduced a bill that sought to fine New Jersey residents $15,000 for violating New Jersey Governor Phil Murphy’s executive lockdown orders barring families and groups from gathering.

“Let the games begin!” McGuckin, who was hired this year by Hill as the Toms River Township attorney, a contract worth an estimated $400,000 annually.  Since getting the job last spring, McGuckin has yet to attend a single Toms River Township Council meeting, despite being the head of the township’s legal department.

McGuckin, who is also legally barred by New Jersey State Election Law from meddling in political club affairs sent a letter to co-conspirators Frank B. Holman, the Ocean County GOP Chairman and other Republicans in Toms River participating in the latest coup attempt.  Holman’s firm receives over $4,000,000 annually in public contracts.

“On behalf of the Republicans for Toms River, please accept the attached petition and submission seeking to be the recognized organization affiliated with the OCGOP,” an attorney for McGuckin, Anne Hammil Pasqua wrote to the Ocean County GOP executive board. 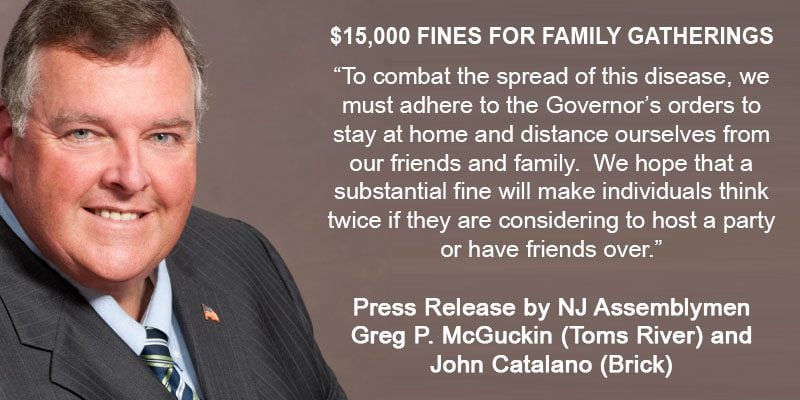 “Bring your helmet,” said Jerry Dasti, who many believe is actually the de facto leader of the Ocean County GOP.  The letter was sent to special interests and pay to play professional contractors across Ocean County who have financial and political interests in possibly supporting the McGuckin and Hill coup in Toms River.

McGuckin claims the Regular Toms River Republican Club is in violation of its bylaws by not formally supporting and endorsing Toms River Mayor Maurice B. Hill.  In 2019, Hill quit the Toms River Club after not being endorsed for Mayor and ran a primary election against the party, winning through new alliances forged around town by the mayor.

The club officially became a “Continuing Political Committee” on February 15, 2021. The club met three times prior, it claims on December 16, 2020; January 19, 2021; and February 15, 2021. Over the past three months, the club operated in secrecy with many dual members attending both Toms River Republican Club meetings and the new rebel faction club.  Once it was clear that Hill, Haines and McGuckin could not legally seize control of the Toms River Republican Club, they formed their own club.

In September of 2020, Hill and McGuckin attempted to overthrow the club by bringing 50 new members to the meeting, but the meeting ended before the board was able to formally admit those members.