BRICK TOWNSHIP, NJ – Residents of Brick Township this weekend may smell thick smoke in the air in different parts of town depending upon the wind direction.

The Brick Township Police Department today said there’s nothing to worry about. It’s part of a controlled burn to manage are forests.

If you see ash in the air or experience heavy areas of smoke, police say don’t be alarmed.

“You may see hazy/smoky conditions in these areas during these times, and even possibly some ash in the air. Don’t be alarmed,” the department said.

Forest Fire Service personnel use best management practices and follow a plan to control smoke impacts during the burns, but nearby residents and visitors should expect to see large plumes of smoke and may experience temporary impacts from smoke this time of year. Peak wildfire season begins in late March and continues through early May.

“The Forest Fire Service also works with the DEP’s Air Quality division to protect public health by ensuring that prescribed burns do not occur on poor air quality days,” Commissioner McCabe said. “This partnership affirms our commitment to meeting rigorous air quality standards while safeguarding communities and reducing the risk for wildfire.” 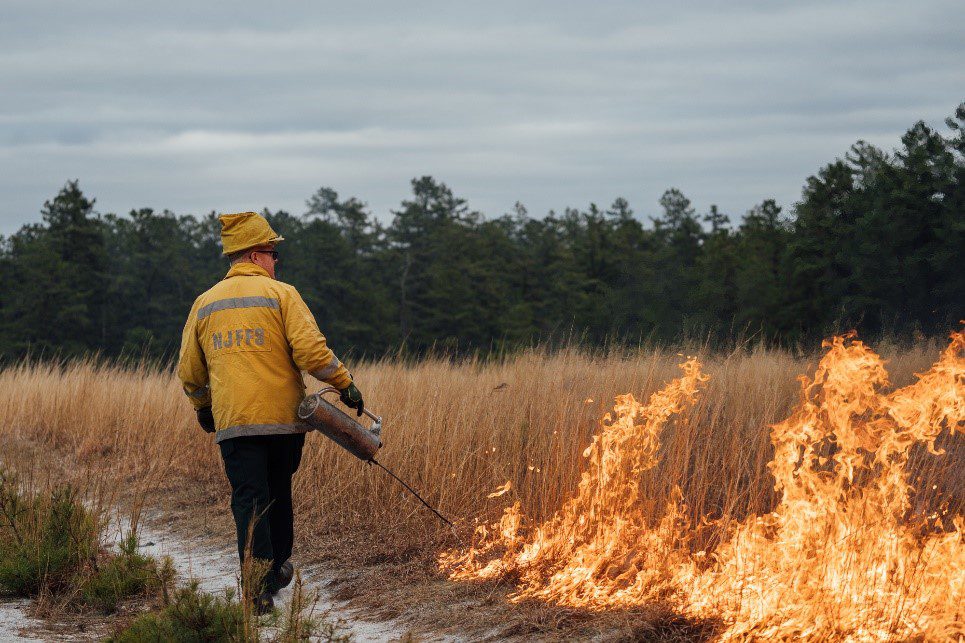 “Prescribed burning is one of our most important tools in helping to prevent and reduce the intensity of wildfires,” said Greg McLaughlin, State Firewarden and Chief of the New Jersey Forest Fire Service. “Creating strategic fire breaks near developed areas helps fire suppression efforts and allows us to protect lives and property.”

Motorists are reminded to use caution when approaching areas where prescribed burns are taking place, by paying attention to posted reduced speed limits and being alert to the presence of trucks and Forest Fire Service personnel.

The State Forest Fire Service works to provide as much public notice as possible on the areas where prescribed burns are to take place. To sign up for text or email notifications of prescribed burns, visit  https://public.govdelivery.com/accounts/NJDEP/subscriber/new.

Prescribed burns, also known as controlled burns, are generally conducted during late winter months to reduce the amount of smoke produced and because weather conditions tend to be more predictable for safer controlled fires. The lack of snow and ice on the ground so far this winter gives the Forest Fire Service a good start on conducting controlled burns to reduce wildfire risk.

“Controlled burns have a number of benefits for our forests and ecosystems,” said Ray Bukowski, Assistant Commissioner for Natural and Historic Resources. “In addition to burning away materials that can fuel wildfires, controlled burns can improve wildlife habitats, manage competing species of plants and trees, control insects and disease, and recycle important nutrients into the soil. All of these activities help keep New Jersey’s forest ecosystem vibrant and healthy.”

During prime wildfire season, fallen leaves, branches and twigs are abundant, daylight increases, humidity can be low, and the air is often warm and windy. These weather conditions coupled with lack of new leaf growth makes the debris on forest floors more susceptible to the drying effects of wind and sun.

Wildfires can have the greatest impact in areas where people live in or near forests, grasslands and other natural areas. The sprawling Pinelands region in southern New Jersey is especially prone to wildfires because its ecosystem has adapted to depend on periodic wildfires for releasing of seeds for reproduction. Controlling the buildup of fuel in this area of the state helps keep the forest healthy.

During controlled burns, Forest Fire Service personnel use handheld torches to set smaller fires to burn away fallen leaves, pine needles, fallen branches and other debris on the forest floor. Personnel consider wind, moisture and other conditions in setting the fires, which influence a burn’s intensity and severity to accomplish various resource and ecological objectives such as hazard fuel reduction and habitat management.

This season, the Forest Fire Service expects to conduct prescribed burns on approximately 35,000 acres. Most burns will occur on state-owned property such as state forests, parks and wildlife management areas, and other government lands. The service also will place increased focus on assisting private landowners and nonprofit organizations to mitigate wildfire risk.

The 2019 controlled burn season was one of the most successful on record for the Forest Fire Service, which has been protecting lives and property since 1906. In total, the Forest Fire Service conducted burns on 28,816 acres statewide. That includes burns on 14,634 acres of state lands, 7,316 acres on private and other government lands and 6,866 acres of burns done by landowners.

Last summer Governor Phil Murphy signed into law “The Prescribed Burn Act,” which preserved landowners’ rights to prescribed burns, strengthened protections for practitioners and expanded acceptable uses of prescribed fire from reducing traditional hazard fuels to recognizing the benefits of habitat management as well as other forestry and ecological needs.

The Forest Fire Service’s national leadership in prescribed burns and fighting wildfires frequently draws firefighters, students, scientists and researchers from around the country and world to New Jersey to learn about prescribed burning, the fire adaptability and ecology of the Pinelands region and forest management.

This spring the Forest Fire Service will welcome students from Northern Arizona University to train them in prescribed burns, in addition to working with personnel from Pennsylvania, New York and Montana.

During the fall, New Jersey will host scientists and managers from across the country to demonstrate some of the prescribed burning research and findings produced by the Forest Fire Service.

The public may contact one of the State Forest Fire Service’s three Division offices at www.nj.gov/dep/parksandforests/fire/contactus.html to learn more about the prescribed burns program and where burns are expected to be conducted.

To learn more about wildfires in New Jersey, steps to protect property, and other resources, visit www.njwildfire.org.