LVIV, Ukraine – Thousands of women and children, many weeping and numb with exhaustion, arrived in Lviv in western Ukraine on Saturday as the state railway put on more trains to rescue people from fierce Russian attacks on eastern cities.

“I’ve barely slept for 10 days,” said Anna Filatova, who had arrived with her two daughters from Kharkiv, Ukraine’s second city, near its eastern border with Russia. “The Russians want to flatten Kharkiv. It was impossible to stay there anymore.”

Hundreds more people lined up in flurries of snow on the station forecourt, warming themselves on oil-drum braziers or lining up for hot food and drinks served by volunteers.

Many women were in tears or on the verge of tears, their weary children standing silently beside them. Others carried cats in baskets or pulled shivering dogs on leashes.

The longest line was for free buses to neighbouring Poland for women, children and older men. Men of fighting age are not permitted to leave Ukraine.

Other women shuffled with their children through a crowded tunnel leading to a platform where were four or five trains a day leave for Poland. But people were not being allowed to bring big luggage on board.

A train carrying soldiers, which Reuters was ordered not to photograph, set off in the opposite direction.

Russia said its units had opened humanitarian corridors to allow evacuation of civilians from the cities of Mariupol and Volnovakha in eastern Ukraine, encircled by its troops.

But officials in Mariupol said Moscow was not fully observing the limited ceasefire, and the International Committee of the Red Cross said it understood that evacuations would not start on Saturday.

Filatova said Kharkiv had been bombed and shelled constantly since Feb. 24, when the Russian invasion began.

Her daughters – Margarita, 18, and Lilly, 4 – still jumped at any loud noise. Her husband had stayed behind to fight.

She said her area had lost power and cellphone connections, and there were huge lines outside food shops.

She and her daughters had only a backpack each and a small plastic bag of snacks, and her eyes filled with tears as she spoke of how much they had left behind.

She was also defiant. “The Russians thought Kharkiv would welcome them. But we hate them. We hate Putin.”

She planned to rest in Lviv before heading to Poland and eventually Switzerland, where she could stay with relatives.

Nina Myronenko stood on Platform 3 with tears streaming down her face. “Do you know any volunteers here who can help me?” she asked passers-by, clutching her infant son Timofiy.

She had arrived from Zaporizhzhia, on the Dnieper River, where on Friday Russian troops attacked Ukraine’s largest nuclear power station, setting a training facility on fire.

The fire was extinguished, but fears of a nuclear incident caused panic.

Myronenko had squeezed onto a train with Timofiy and two plastic bags of possessions. “You can’t take a lot of luggage, because then you’re taking up another person’s place,” she said.

During the night, there was shooting near the track and the train lights went out, she said. Passengers were told to turn off their phones.

Myronenko didn’t have to. In her rush to leave home, she had forgotten hers, which was complicating her efforts to contact family and get help.

She said her brother, a defence volunteer, had been injured by shrapnel during a Russian attack. Her husband had also stayed in Zaporizhzhia to fight. “If everyone leaves, who will protect Ukraine?” she wept.

Dasha Murzhy had just arrived from Odessa, a port city on the Black Sea, with her two small boys. Tired and dishevelled, she tugged one son back from the platform edge, then perched the other on her suitcase.

Murzhy was smiling, but not because she was happy.

“I’ve got children so I’m not allowed to cry. I’ve got to stay positive for them.” 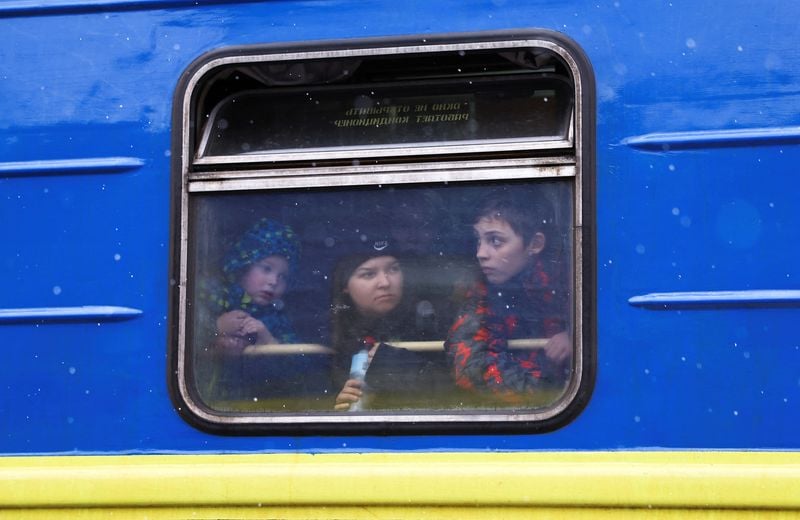 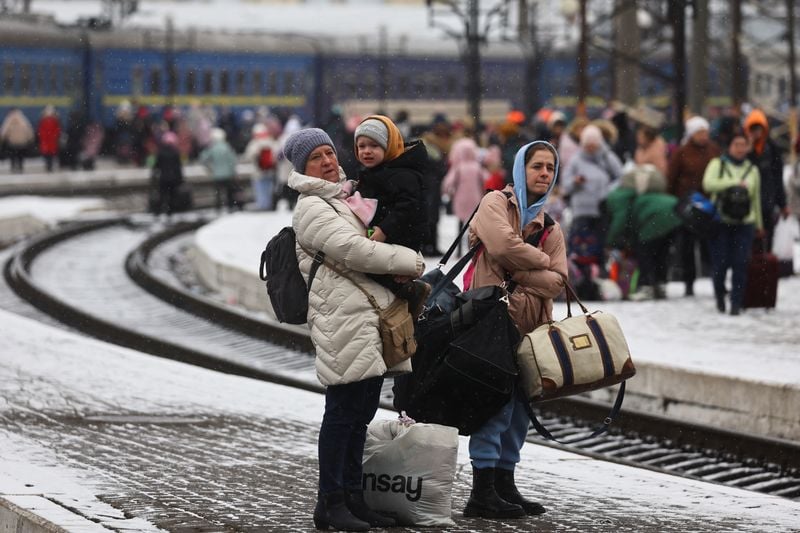 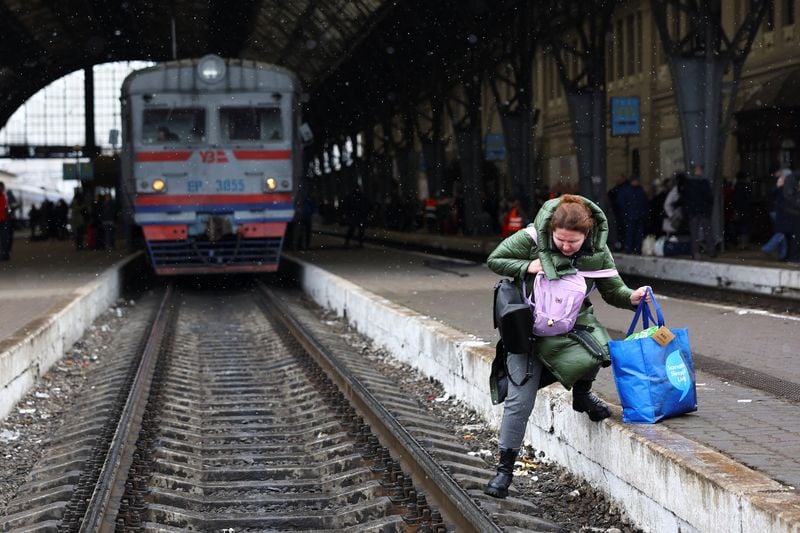 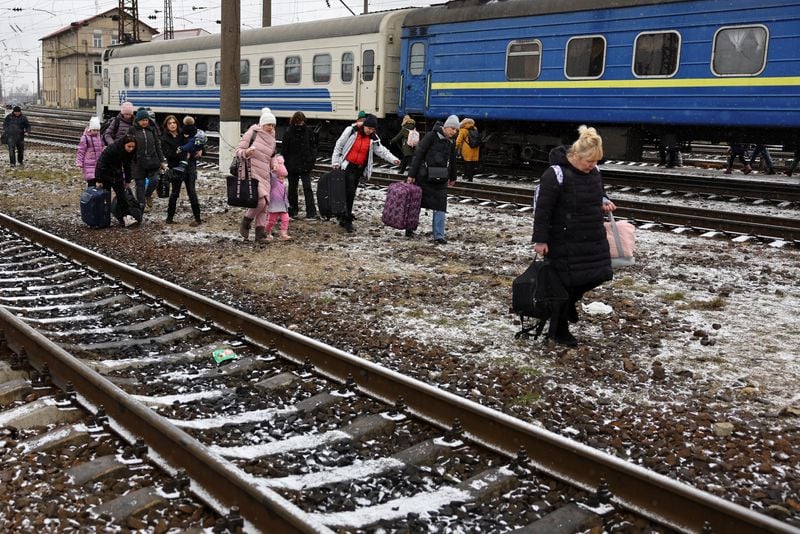 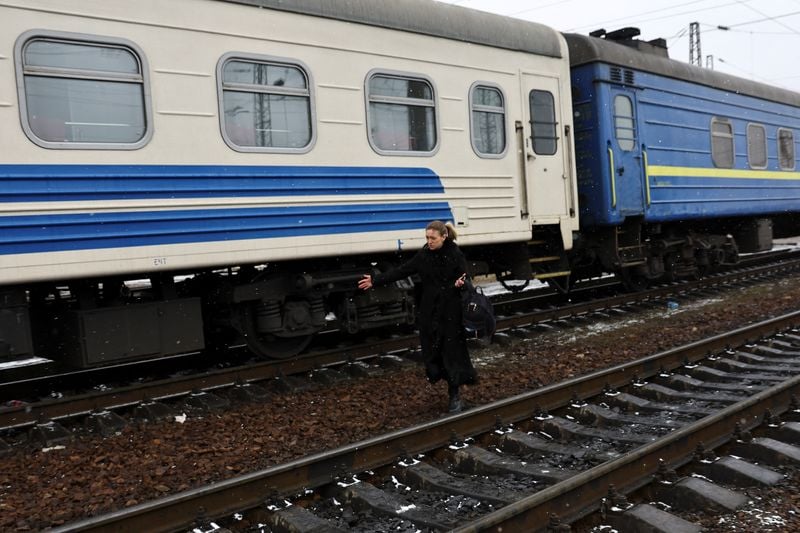