By Jamie Freed and Farah Master

The carrier is falling behind traditional rival Singapore Airlines Ltd (SIA) in restoring international capacity as roster preparations are complicated by a quarantine requirement for Hong Kong-based crew of passenger planes to spend three nights in hotels on their return from each trip.

The financial hub is also one of a few places in the world, along with mainland China and Taiwan, to still require COVID-19 quarantine for arriving passengers, though such hotel stays are to be cut to three days from seven, officials said this week.

Cathay’s first-half revenue rose 17% to HK$18.6 billion, driven by an increase in ticket sales and persistent strong demand for air cargo, although passenger numbers stayed 95.2% below pre-pandemic levels in June.

Its loss was narrower than the HK$7.57 billion reported a year earlier, with cash flow turning positive toward the end of the period, and it expects financial results to improve in the second half.

“We expect both the pent-up passenger demand and cargo peak season to lead to a second-half return to profitability,” Jefferies analyst Andrew Lee said in a note.

The company’s shares rose after the results by as much as 3.3%, to stand at their highest since June 2020, before giving up some gains to trade up 1%.

Cathay reiterated on Wednesday that it expected passenger capacity to approach up to a quarter of pre-pandemic levels by the end of the year, up from 11% in June.

Chairman Patrick Healy said the airline’s huge backlog of retraining requirements for crew, many of whom had not flown for more than a year, could not be resolved until quarantine rules were lifted.

“This, combined with other operational complexities, means that capacity can only be increased gradually over a period of several months, following the removal of all COVID-related operating constraints,” he told reporters.

In Singapore, which has dropped mandatory quarantine, SIA said last month it had swung to a net profit of S$370 million ($268.49 million) in the June quarter, when it operated at 61% of pre-pandemic capacity. SIA expects that figure to rise to 81% by the end of December.

As curbs ease, Cathay is readying to bring more planes out of storage to restore Hong Kong’s status as an air transport hub, though the speed depends in part on the easing of crew quarantine rules, operations head Greg Hughes said.

The airline reaffirmed its goal of hiring more than 4,000 staff to fill operational needs over the next 18 to 24 months as travel rebounds, after having cut more than 6,000 jobs during the pandemic.

Pilot attrition has also been higher than normal because of the onerous quarantine requirements, combined with permanent pay cuts of as much as 58%.

Cathay is expected to report a full-year loss of HK$4.5 billion, according to an average of 11 analyst estimates compiled by Refinitiv. 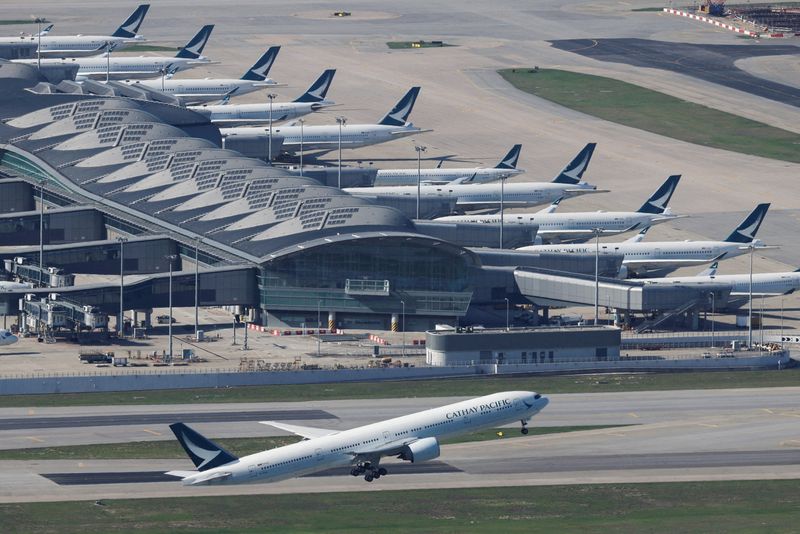